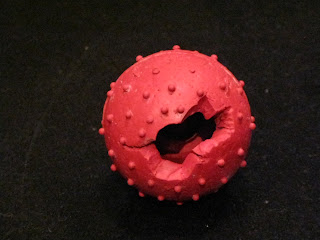 Although there has not yet been an official press release by either Four Paws Products or the CPSC regarding this dog toy, we suspect it will soon be recalled for reasons discussed below. In the meantime, we would urge dog owners to check their pets’ toys and remove this item if your pet has access to it.

The “Pimple Ball” dog toy does not have a hole in it to release vacuum pressure formed inside the ball. This can become dangerous when dogs chew through the rubber, creating a hole large enough for their tongue, which can then get sucked into the ball.

Thanks to the work of Chai’s owner in creating The Chai Story Blog, thousands of Americans were made aware of the dangers, which may have caused Four Paws Products to take this dog toy off the market, as it is no longer available on their website. After posting Chai’s story, the blog’s author began to receive reports from others who have experienced similar circumstances, including a french bulldog named Petunia, who’s owners explained “the same thing happened twice in one night with a smaller version of the same ball.” Fortunately, they were able to pull it off before the tongue swelled, but not without tremendous effort and pain to the dog. They recalled how horrific it was to hear their beloved pet screaming while they had to pry the ball from her tongue.

Chai’s tongue had to be amputated (more on his unfortunate situation below) after it became stuck inside the ball and his owner was unable to pull it out.

(A very sad video of Chai’s caretakers trying to get him to drink water after having his tonge amputated.)

Who knows how much longer these toys would continue being sold if Chai’s caretaker had not been able to bring his story to the internet.